Obsessed with reading, writing, spelling. This happened so fast.
Becomes intensely interested in science things: hurricanes, beavers, and spouts factoids.
Long bike rides, up to 2 hours, 18 kms today.
Seems to balance being social and solitary. Content in either.

Start of school and the virus comes

The start of school. Feeling optimistic and full hearted and grateful.

Then the virus in China. International education collapsing. Everyone rallying for China.
Went to physio and talked about how the Olympics might be cancelled. Went to Prep new families picnic and shaking hands was becoming unfashionable.

Then I read this article on Medium and didn't want to go into the office on Friday 13 March. I did, and told my staff that it would be the last day. After work I went to the supermarket to stock up and realised that would be the last time. Swimming lesson the next day, realised it would be the last. Stopped get public transport to work, started riding. Taking Milla to school was the only outing, felt ridiculous.

We wished for a decision, for school to close. And then it did. Homeschool started. Charlie drew up a program so we could balance our work and the Milla supervision. She lapped up the learning. 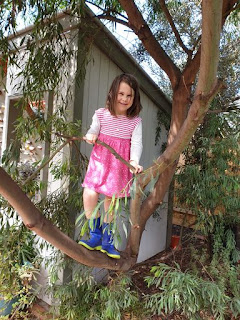 Term two is starting, remotely, with us parents supervising the learning. A different feel indeed.

Our new habits will hopefully run through: morning walks all together; cooked lunches; home yoga and rides in the middle of the day; Skype sessions with grandma.
Posted by Bonnie Conquest at 12.4.20 1 comment:

End of kinder. End of an era. 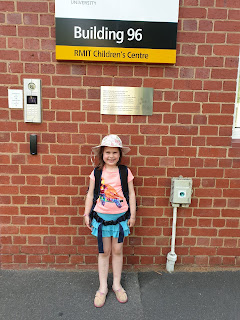 Milla feeling emotional at drop off to RMIT childcare today. It's been 4.5 years of her life for most days of the week. She runs the place.

Tomorrow last day of her other kinder, the one we have loved, that has challenged and delighted us all.

Milla at the end of kinder. 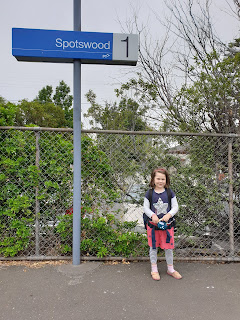 Only two days in Wandiligong and we notice Milla seems older. Everytime we head away there is a leap. She is talking in a more sophisticated manner, she looks tall. She is so incredibly good at puzzles, keen to sound out words: the toilet block at Mount Buffalo 'w-o-m-e-n'!! So fast and confident in snowshoes and then infuriatingly stops. Maybe she just wants to play. Five years and two months old.
Posted by Bonnie Conquest at 4.9.19 No comments:

Milla at five is great company.

Posted by Bonnie Conquest at 4.9.19 No comments:

And just like that, she's all about reading, writing, letters and spelling.


Over summer she gained the ability to listen to chapter books.

Over the past few weeks, a hunger to understand words.And remembering more and more.

She could write our names. Then 'love'. I started getting love letters last year 'Milla love Mum'.

Now birthday cards she can write, mostly unassisted, save for 'from': 'happy birthday Grandma, love from Milla'.

Reading my copy of the BFG, she's keen to pick out 'snozzcumber' on the page, and will find 'Sophie' very quickly.

What an electric time.

I'm feeling pretty much myself now. Two and a half days after finishing Oxfam Trailwalker. My first time, after a few years of aspiration, I finally did it. 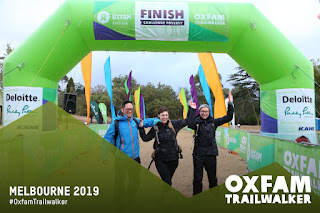 It's hard to own it and figure out what made me successful. The text Charlie sent me saying 'full grit' totally resonates.

I was in pain from early on, blisters appearing on both feet. My muscles were better than I feared, quads getting achy in the final quarter. When it was cold.

We chatted. We remembered the trail. Just two small sections we'd never walked. We worried about the rain. We talked about the times. When support crew was coming. We ate heaps of sugar. We thought about Jen and how to keep her going and if she was going to make it.

I jogged up hills, it was easier on my body. I fell asleep and kept on walking. I couldn't think of anything.

I think I felt euphoric for the final 5-10km as I knew it was going to happen, I would complete.
Posted by Bonnie Conquest at 1.4.19 No comments:

Books at four and a half